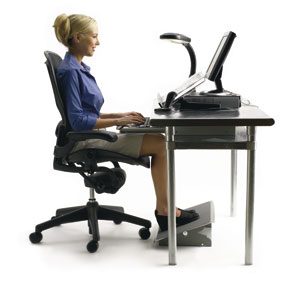 When people ask me what I do for a living I think I have a pretty cool answer: I write. Now when people hear that you are a writer, they assume that you are like Stephen King or Michael Creighton. Not … even… close. I write for a few big internet sites, mostly top five, and top ten lists with a humorous approach and I truly enjoy my job.

But writing comes with its own ups and downs for example many writers will frequently sit in front of their computers staring at a blank screen victim to the all familiar writer’s block.

If it’s not writer’s block getting in the way extended hours are the PC often trigger aches and pains or even a need for a quick power nap. But as common as all this is I was surprised when I learned that ergonomics, or lack thereof is a key ingredient to productivity and the elimination of those aches and pains.

There is nothing worse than having a great idea and wanting to put it down, only to feel your back stinging like crazy. There have been times that I have thrown my hands in the air and simply given up on writing an article (deadlines can often be extended) simply because I was too uncomfortable to write.

For many people this may sound like a “first world problem”, being uncomfortable while you get to do what you love but for me it was worth it. After talking to a friend who is a chiropractor, I found out that I was not the only person who felt uncomfortable while sitting down.

Part of the problem is the fact that I slouch a lot, I do not have everything written out before I start typing (that would kind of defeat the purpose) so instead I sit in my chair a lot, read other articles and look up information.

While I do use the zoom function of my browser quite a bit, I realize that I am straining my eyes quite a bit to make sure that I see what is written. From the discussion that I had with the aforementioned chiropractor, this is part of the problem.

Prevent Instead of Cure

So even though I was looking for a way to relieve my back pain, I should have looked no further than my workstation. I now realize that the simple chair I picked up from IKEA for 20 dollars is not going to provide me with the support that I need, especially since I sit in it for hours straight. Who would have known?

So the first thing I did was get a new chair, one that actually had lumbar support. It may have been a little more expensive but I noticed that if I sat in it correctly, it supported my back. I also went out and got one of those mouse pads that protect your wrist from carpal tunnel syndrome. It did seem uncomfortable at first but after I was done writing the first few paragraphs of a new article I did not even realize that I was using it anymore.

I was also taught that you should not be too close to the monitor. I do not wear glasses but sometimes fonts on the internet can be quite small (especially if you are looking for a specific phrase or word) so most of the time I just lean forward to get a better view. That is apparently a no-no now too.

I really improve my productivity when I am writing in an optimized workstation. I feel more comfortable and can type longer than I did before. It becomes easier to sit down for an extended period of time, especially if there is no way for someone to push my deadline back. So I have to admit my new ergonomic workstation really helped physically – now if only it could do something for my writers block…

Jason Munroe is a freelance writer of 28 years old. He currently resides in California and when he is not trying to be funny on the Internet (sort of) he enjoys spending time with his wife and child. His latest work is done in collaboration with a Sacramento chiropractor to write about a possible back pain remedy in Sacramento for those who spend a long time at their desk each day.