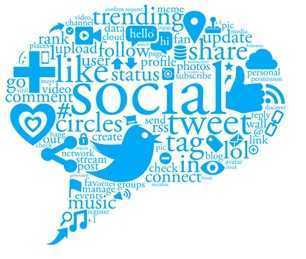 A social networking service is an online service, platform, or site that focuses on facilitating the building of social networks or social relations among people who, for example, share interests, activities, backgrounds, or real-life connections. It consists of a representation of each user (user profile), his/her social links (family, friends, and people in the same field of work), and a variety of additional services like photo and video sharing. Most social network services are web-based and users interact over the internet.

The following are some of the most popular social networking media and how many percentages of people use them:

Results were based from a survey involving online adults dated August 2012.

46% of these adult internet users post original photos or videos online that they themselves have created. Forty-one percent (41%) of them take photos or videos that they have found online and repost them on sites designed for sharing images with many people.

A research among people 18 years old and above also shows that women are engaged in social networking activity more often than men.

Among these users, the young adults are the most active.

In line with business matters, social networking sites would be an ideal media to market your offered products or services. Here’s a data on social sites users based on Annual Household Income:

This implies that you have more probability of gaining your return of investments from people who have financial resources, who happened to be actively engaged with social media as well.

Furthermore, a recent survey of 600 small business owners across United States indicates that 90% are actively participating in social networking sites. With this, it is therefore concluded that social media is still in the spotlight and that users are still expected to increase.

With all of these, we can say that the benefits of social networking sites are multiple. The main advantage would be getting a wider scope of audience for the business you’re promoting.  These sites have an inherent viral potential that can contribute a lot in terms of boosting traffic and brand building.

Randolf John Burton is an online marketing specialist dedicated in providing efficient and worthy solutions in getting valuable links and potential income for clients’ product or services. He currently works for http://www.loopyart.com/ – a website which provides awesome infographic submissions which keep its readers well-informed and entertained at the same time.